Maglev and Hyperloop – 5 years on

The SkedGo team is passionate and excited about new and future technologies, especially new ways to get around. This is why we’ve started the “future of transport” series, with posts about flying cars, smart cars, a vision of a car-free future, self-balancing electric unicycles, jetpacks, moving sidewalks and a very geeky teleportation post. If you’d like to stay up to date and follow the latest MaaS developments, sign up for our newsletter.

Our 2014 article about maglev trains has been one of the most read on our blog. Now, nearly 5 years later, we’re looking at what’s been happening. Which of the trains in the original article are still running, which ones are new, which ideas have been canned or realised?

There are a few maglev trains around (actually, the technology is older than you might think). Many teams around the world are currently also working on hyperloop trains, which run through near vacuum tubes. Especially for the latter, promises sound fantastic: Most of them claim the trains will be…

There’s an interesting comparison on TravelStatsMan.com. It looks at different high-speed trains (not just maglev/hyperloop) and compares them with planes in terms of travel time, costs and CO2.

You can also read more about the potential environmental impacts of hyperloops here.

There are six commercial trains running currently that use maglev technology, three of which we already reported in the 2014 article, and three that have started operation since:

However, there’s still a big (and fast!) one… 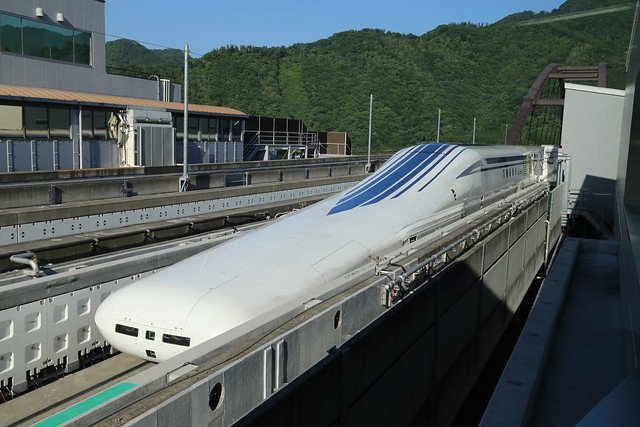 Construction for the Chūō Shinkansen L0 maglev train in Japan started in 2014. While testing in 2015, the train set a world speed record of 603 km/h. The expected operation speed is a little slower with 505 km/h – but can you imagine travelling along the ground that fast? Unfortunately we’ll have to wait a little longer; the Chūō Shinkansen is planned to be completed in 2037.

China has also just unveiled a new maglev train prototype in Qingdao, capable of running at 600 km/h as well.

But wait, it gets even faster… with:

In the last article, “the Hyperloop” was a specific vactrain concept (called Hyperloop Alpha) proposed by Tesla and Space X founder Elon Musk in 2013. Today, “hyperloop” is a generic name for a whole species of dreamed up maglev trains running in near vacuum tubes. Expected travel speeds of the final train would be around 1200km/h. The basic concept for most of them stems from Musk’s concept which was open-sourced, although the idea of vactrains has been around for much longer.

So far, two Space X Hyperloop Pod competitions have been held, and many prototypes have been tested. There have also been several feasibility, environmental and other studies about hyperloop systems, and lots of hard conceptualisation and planning work. The barriers to realising a hyperloop are bureaucratic as well as financial, technical and even social. Currently there is not one system that is ready to run commercially; however, much work is happening behind the scenes, and we are hoping to see the first commercial hyperloop running in the next decade, maybe even in the next 3 years.

Some of the most promising hyperloop projects/companies:

The Hyperloop Konsortium, a collaboration between Hardt, Zeleros, TransPod and Polish startup HyperPoland, is currently working on developing standards and regulations for hyperloop. This will much facilitate global adaptation of the technology.

If you’re interested in the hyperloop, don’t miss the 2019 Hyperloop Pod Competition which will take place on July 21, 2019. You can also follow @hyperloop on twitter for updates.

SkedGo was started in 2009 by three founders with previous successful exits and has offices in Australia (HQ), Vietnam, Argentina, Germany, Finland and the UK.

CEO and founder Claus von Hessberg started SkedGo to address social and environmental challenges, with focus on mobility as a service and transportation. He was nominated as one of the ‘Top Ten Mobility as a Service Influencers’ by industry publication BMaaS. CTO and Co-founder Adrian Schoenig leads the development teams at SkedGo. He has a background in information systems and computer science, with a major in artificial intelligence. Co-founder Dr Tim Cooper holds a PhD in Computer Science from Sydney University. He runs several successful businesses in the tech space.