“She walked down a passage to a lift, and so came to one of the streets of that latter-day London, all glazed in with glass from the weather, and with incessant moving platforms that went to all parts of the city. And by one of these she returned to her apartments in the Hotel for Women where she lived (…)”

This was the first mention of moving sidewalks – aka “slidewalks” or travellators, an impressive 118 years ago. Since then, they have appeared in numerous science fiction novels (e.g. “The Roads Must Roll” by R.A. Heinlein in 1940, the “Robot” series by I. Asimov), and in movies and on TV like in the animated series “The Jetsons”.

Basically, the idea is that moving walkways replace our current walkways and are used as a means of mass transportation. Cities would feature a whole system of them and thus rely less on other methods of transport. Riders just step on them and get transported quickly to where they would like to go. They are screened from wind and ideally have seats to improve comfort. Many concepts feature several of these belts next to each other, with the faster ones on the inside, so riders can cross over for faster travel.
Similar systems could also be used to transport goods as proposed by some authors.
(By the way, this is not the kind of slidewalk we’re talking about here – but it’s pretty awesome nevertheless!)

Obviously, walking on moving sidewalks is faster than on traditional, static ones.
Slidewalks are also more accessible, regular and flexible than most public transport options available today. With a good network of slidewalks all over the city, fewer people would have to use cars and other polluting modes of transport, leading to cleaner air and greater health.

Where are we today?

Most of us have used travellators at airports, during a ski trip (if you’re a beginner), in shopping centres, museums, zoos or theme parks.
Those travellators are of course only a very basic version of the vision outlined above, very slow and short-distance. Are there any proper systems out there to transport people over longer distances?

Yes, the most notable one is in Hong Kong. It features a whole system of covered escalators and walkways, called the Central-Mid-Levels, about 800m in length. Check out the BBC’s video on it here. The system was built to assist residents in navigating the city’s steep, hilly terrain and has been very successful as a transport system as well as a tourist attraction. It has also transformed whole parts of the city by making them more accessible to more people.
Hong Kong’s system is still quite slow though. What about faster ones?

There have been a few experiments with high-speed walkways. A slidewalk in a metro station in Paris in 2002 operated at 12km/h, but after slowing it down due to many people losing balance and falling in the acceleration zone, the project was abandoned a few years later.
There is a ThyssenKrupp system operating at Pearson International Airport in Toronto (video). The walkway moves with about 2km/h to step on, then accelerates to 7km/h and decelerates at the end. Of course, 7km/h is still not high speed, but it seems to have solved the problem of how to get riders onto and off a travellator.
Towards the end of last year, ThyssenKrupp announced the system’s successor, ACCEL, a maglev system on which riders can walk to reach a speed of 12km/h. Still a long way to go to the 100km/h plus imagined by some science fiction authors, but a start nevertheless. 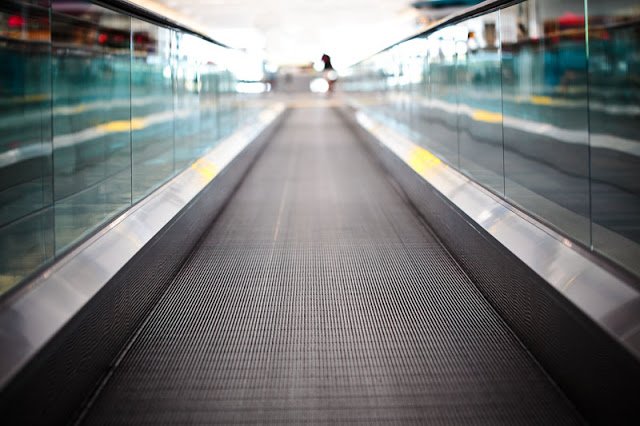 What’s stopping us from having high-speed slidewalk systems in our cities?

Safety: A main issue is acceleration and deceleration, which many systems have struggled with, including the Paris one. ThyssenKrupp might have found a good solution (see above), but it is not clear what the system’s maximum speed is. For systems that include several belts with varying speeds, transition between belts also has to be figured out.
Cost: First of all, there is of course the cost of building the whole network of moving sidewalks. But even after that, a constant stream of riders would be needed to justify the cost and energy use. Decreasing the frequency during times of low usage as is done for other public transport systems is not possible. Hong Kong’s solution with the walkways reversing direction depending on commuter flow might be part of the solution though.
Reliability: If one part in the system breaks down, the whole belt will come to a stop. Riders would have to walk or switch to other systems while the moving walkway is being fixed.

So, it might be many more years until we can live in the city of “Robots” or “The Roads Must Roll” – but progress is being made, and chances are we’ll see some cities implement slidewalk systems in our lifetime still.

What do you think about moving sidewalks?
Have you used the one in Hong Kong? Paris? Toronto? How did you find them?

Let us know in the comments below!